Rome, the Eternal City. Roma Caput Mundi. Roma Aqua Vitae.
Imperial Rome, Renaissance Rome, the Rome of aesthetics and art. There are as many Rome as people who have watched enraptured the sheer beauty of this city.
In its streets inhabit the shadows of Cesar and the Borgia. In its cobbled streets we can hear the echoes of Anita Ekberg and Mastroianni, the presence of Audrey Hepburn intuits around every corner, and the fountains of Rome are the soundtrack of this unique citá.
Because Rome is the place with more fountains, fontanelle and fontane, around the world, some are colossal -as Trevi Fountain or Four Rivers Fountain-, other are modest like the Babuino or Fountain of Facchino-, but all special with its own personality.

La Cuerba pays homage to Rome and its sounds in this beautiful short film directed by Aldo Ferradás: AQUA

For Romans, water was considered a gift from the gods and each of the sources was under the patronage of a nymph. Roman engineering at the time distributed water throughout the city, ensuring consumption and hygiene. Today, the fountains of Rome are presented as small monuments to admire, erected by some of the most important architects of the Italian Baroque, and gracing our walks.

A goccia a goccia s’incava la pietra, they say the Romans. They know about the persistence of water, aqua, they conceive life as a liquid course that fits transforming all around. Aqua profunda est quieta, “still waters run deep” the ancients whisper to us from their wet graves, the water that cure is also the water that kills.

Here’s the secret of its success. Rome has flowed as the water, dropwise from Luperca’s milk -the she-wolf that fed Romulus and Remus- infusing her spirit into every stone of this city-museum. Wisdom flowing through time and water.

Because all roads lead to Rome and Rome, like water, is an essential place. 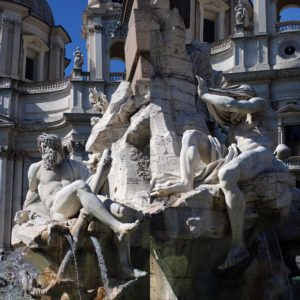